Gained cityhood through Republic Act No. 9405,[1] it is only city in the province of Agusan del Sur. Bayugan serves as the growth center of the province.Template:Citation needed

Located at the northern part of Agusan del Sur, Bayugan is the "cut-flower capital" of the province owing to its lucrative cut flower industry. The city's climate, especially in the highland barangays, is conducive to high yield cut-flower production. The city is also one of the major producers of rice and vegetables in the province, even providing the needs of neighboring municipalities and provinces.Template:Citation needed

The natives called the area Bayugan since the word bayugan is a Manobo term for pathway. Another version states that bayug trees used to grow abundantly in the area. It was also believed that the natives used to make this place their meeting spot and that the means of gathering the inhabitants was by knocking on a hollow piece of wood which they termed as the bayug.

Bayugan City was formerly a sitio of Barangay Maygatasan, Esperanza.[2] Several versions abound on how the sitio got its name. First, the place was located along the river which served as the pathway of the natives in going to Esperanza.

In 1945, the town of Bayugan in Southern Agusan was liberated by Filipino soldiers and guerrillas from the Japanese forces occupying the town.

In 1948, the Department of Public Works and Highways conducted a survey for a National Highway that would connect Butuan with Davao City. Simultaneously, the Bureau of Lands surveyed the places that would be traversed by the proposed road. Possible town sites were identified and among them was Barangay Maygatasan. However, part of the National Highway (now the Narra Avenue) passed through the sitio of Bayugan instead of Barangay Maygatasan. Migrants started settling in the sitio of Bayugan, thus, prompting the transfer of the proposed town site.

In the early part of 1960, the inhabitants led by Mr. Jose Joson passed a resolution creating the sitio of Bayugan into a regular barrio. In April of that year, Barangay Bayugan was inaugurated with Joson as the Teniente del Barrio. Brought about by the construction of the National Highway which traversed the place, business activity sprouted rapidly in the area.

A year later, barangay officials led by then Sergio Mullaneda worked out the creation of Bayugan into a regular municipality through the assistance of Governor Democrito O. Plaza, Governor of Agusan. By virtue of Executive Order No. 440 of then President Carlos P. Garcia, the petition to create the municipality of Bayugan was granted on August 6, 1961. Mr. Mullaneda, the first appointed Municipal Mayor of Bayugan assumed into office on August 6, 1962 during the term of President Diosdado Macapagal. In the year 2007 Bayugan was converted to a city.

Bayugan is a transportation highway nexus for the eastern part of Mindanao Island. Bayugan is now one if not the fastest growing component city in North Eastern Mindanao.

On July 24, 2006, congress approved R.A. 9405, an act converting the Municipality of Bayugan into a component city to be known as the City of Bayugan.

But in 2008, the Supreme Court of the Philippines declared the law unconstitutional. The court ruled that Bayugan, along with the other fifteen cities covered by the law did not meet the requirements for cityhood.

More than a year later, on December 22, 2009, acting favorably on the appeal of the sixteen affected cities, the Supreme Court reversed its earlier ruling. It deemed that the passage of the amendatory law regarding the criteria for cityhood as set by Congress specifically exempting a particular political subdivision therefrom was constitutional. The court further ruled that congress, in enacting the exempting law, effectively decreased the already codified indicators. As such, the cityhood status of Bayugan, and the rest of the fifteen local government units was restored.

But again on August 24, 2010, in a 16-page resolution, the Supreme Court reinstated its November 18, 2008 decision striking down the constitutionality of Republic Act 9405. Voting 7–6, with two justices abstaining, the SC reinstated its decision declaring RA 9405 as unconstitutional.

However, in another twist of fate for Bayugan, the Supreme Court once again upheld for the 3rd time and final time the constitutionality of RA 9405 on February 17, 2011, thereby finalizing the cityhood of Bayugan and the other fifteen LGUs affected by the law. On July 3, 2011, the Supreme Court ordered its Clerk of Court to issue an entry of judgment on the cityhood case, sealing with finality the constitutionality of the law. [3]

The city is geographically situated below the typhoon belt but is usually affected by depressions forming in the typhoon regions of Visayas and the province of Surigao del Norte. The climate map of the Philippines based on the modified coronas classification shows that the city falls under Type II. Which also is the weather classification of the province of Agusan del Sur.

Type II climate has no dry season with very pronounced wet season of heavy precipitation. Maximum rainfall generally occurs from December to January although there is no single dry month. Its average monthly rainfall is Template:Convert and average temperature is Template:Convert. Areas characterized by this climate type are generally along or very near the eastern coast thus are open to the north-east monsoon. Template:Clear-left

Bayugan is politically subdivided into 43 barangays, of which 3 are urban and 40 are rural.Template:PSGC detail 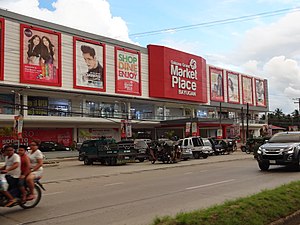 Tourist attractions and places of interest

Major transportation around the vicinity of the city are Motorela/Tricycle and some multicabs which travel to remote barangays. "Habal-habal" is also used as a transport to the mountain barangays of Bayugan.

Butuan Airport: Butuan has the nearest airport from Bayugan.

Davao Airport: From Manila or Cebu to Davao City as transit point.

Surigao Airport: From Manila or Cebu to Surigao City as transit point. 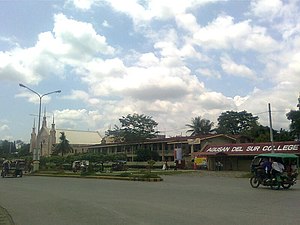 Agusan del Sur Pilot Laboratory School, or commonly known as ADSPILS, is a Public Elementary School. ADSPPILS is the only Special Science Elementary School in the city. The school has about 600 pupils with over 3 sections in each grade, Science Class, Best Class and Crack.

Bayugan National Comprehensive High School, or BNCHS, is a comprehensive high school with a population of about six thousand students, and is located on a site that has an area of 5 hectares. The school is currently recognized for its research program in science related topics. "Comprehensive" it is because it offers different curricula such as ESEP (Engineering and Science Education Program), Special Program in Journalism (pilot school for journalism in Caraga Region), Special Program in the Arts (with the specialization of Visual Arts, Creative Writing, Dancing, Music, Media Arts and Theater Arts), Technical Vocational Courses, Special Program in Sports and Revised Basic Education Curriculum.

Father Saturnino Urios College of Bayugan Inc. (formerly Father Urios Technical Institute of Bayugan Inc. or FUTIBI), is the oldest private educational institution in the city. Located at the heart of the city making it one of the most populous school in Bayugan. Created in the year 1959, Urios caters elementary and secondary basic education. By school year 2010–2011, Urios will be putting up its technical courses. The school was founded by a Jesuit priest Father Atanasio B. De Castro in 1959. The school is currently headed by Mrs. Chereil C. Martel (Principal) and Fr. Roberto Butawan (School Director).