Battle of the Sibuyan Sea 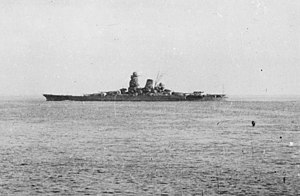 Despite its great strength, the U.S. 3rd Fleet was not well-placed to deal with the threat. On 22 October, Halsey had detached two of his carrier groups to the fleet base at Ulithi to provision and rearm. When Darters contact report came in, Halsey recalled Davison's group, but allowed Vice Admiral John S. McCain, with the strongest of TF 38's carrier groups, to continue towards Ulithi. Halsey finally recalled McCain on 24 October—but the delay meant the most powerful American carrier group played little part in the coming battle and the 3rd Fleet was therefore effectively deprived of nearly 40% of its air strength for most of the engagement. On the morning of 24 October, only three groups were available to strike Kurita's force, and the one best positioned to do so—Gerald F. Bogan's Task Group 38.2 (TG 38.2)—was by mischance the weakest of the groups, containing only one large carrier—USS Intrepid—and two light carriers.

Meanwhile, Vice Admiral Takijirō Ōnishi directed three waves of aircraft from his First Air Fleet based on Luzon against the carriers of Rear Admiral Frederick Sherman's TG 38.3 (whose aircraft were also being used to strike airfields in Luzon to prevent Japanese land-based air attacks on Allied shipping in Leyte Gulf). Each of Ōnishi's strike waves consisted of some 50 to 60 aircraft.

Most of the attacking Japanese planes were intercepted and shot down or driven off by Hellcats of Sherman's combat air patrol, most notably by two fighter sections from USS Essex led by Commander David McCampbell (who shot down a record nine of the attacking planes in this one action, after which he managed to return and land in extremis on USS Langley because the Essexs deck was too busy to accommodate him although he had run short of fuel).

However, one Japanese aircraft (a Yokosuka D4Y3 Judy) slipped through the defences, and at 09:38 hit the light carrier USS Princeton with a 551 lb (250 kg) armour-piercing bomb. The resulting explosion caused a severe fire in Princetons hangar and her emergency sprinkler system failed to operate. As the fire spread rapidly, a series of secondary explosions followed. The fire was gradually brought under control, but at 15:23 there was an enormous explosion (probably in the carrier's bomb stowage aft), causing more casualties aboard Princeton, and even heavier casualties—233 dead and 426 wounded—aboard the light cruiser Birmingham which was coming back alongside to assist with the firefighting. Birmingham was so badly damaged, she was forced to retire. Another light cruiser and two destroyers were also damaged. All efforts to save Princeton failed, and after the remaining crew members were evacuated, she was finally scuttled—torpedoed by the light cruiser Reno—at 17:50. Of Princetons crew, 108 men were killed, while 1,361 survivors were rescued by nearby ships. USS Princeton was the largest American ship lost during the battles around Leyte Gulf, and the only Independence-class fast carrier sunk in combat during the war.

Planes from the carriers Intrepid and Cabot of Bogan's group attacked at about 10:30 scoring hits on the battleships Nagato, Yamato, and Musashi, and badly damaging the heavy cruiser Myōkō which retired to Borneo via Coron Bay. A second wave from Intrepid, Essex and Lexington later attacked, with VB-15 Helldivers and VF-15 Hellcats from Essex, scoring another 10 hits on Musashi. As she withdrew, listing to port, the third wave from Enterprise and Franklin hit her with an additional 11 bombs and eight torpedoes. After being struck by at least 17 bombs and 19 torpedoes, Musashi finally capsized and sank at about 19:35.

In all, five CV fleet carriers and one light CVL of the U.S. 3rd Fleet flew 259 sorties with bombs carried by Helldivers and torpedoes launched by TBF Avengers against Center Force on 24 October, but this weight of the attack was not nearly sufficient to neutralize the threat from Kurita. The largest effort of the Sibuyan Sea attack was directed against just one battleship, Musashi, which was sunk, and the cruiser Myōkō was also crippled by an aerial torpedo. Nevertheless, every other ship in Kurita's force remained battle-worthy and able to advance. It would be the desperate action and great sacrifice of the much weaker force of six slow escort carriers, three destroyers, four destroyer escorts, and 400 aircraft at the Battle off Samar, utterly lacking in credible weapons to sink armored ships, to stop Kurita. It also contrasts with the 527 sorties flown by the 3rd Fleet against Ozawa's much weaker carrier decoy Northern Force on the following day.

Kurita turned his fleet around to get out of range of the aircraft, passing the crippled Musashi as his force retreated. Halsey assumed that this retreat signified that his threat was dealt with for the time being. Kurita, however, waited until 17:15 before turning around again to head for the San Bernardino Strait. As a result of a momentous decision taken by Admiral Halsey and some unclear communication of his plans, Kurita was able to proceed through the San Bernardino Strait during the night to make an unexpected and dramatic appearance off the coast of Samar the following morning, directly threatening the Leyte landings.[1]