Battle for the Liberation of Manila

The Battle of Manila (Filipino: Labanan sa Maynila; Japanese: マニラの戦い; Template:Daterangedash) was a major battle of the Philippine campaign of 1944–45, during the Second World War. It was fought by forces from both the United States and the Philippines against Japanese troops in Manila, the capital city of the Philippines. The month-long battle, which resulted in the death of over 100,000 civilians and the complete devastation of the city, was the scene of the worst urban fighting in the Pacific theater. Japanese forces committed mass murder against Filipino civilians during the battle. Along with the massive loss of life, the battle also destroyed architectural and cultural heritage dating back to the city's founding, and Manila became one of the most devastating capital cities during the entire war, alongside Berlin and Warsaw. The battle ended almost three years of Japanese military occupation in the Philippines (1942–1945). The city's capture was marked as General Douglas MacArthur's key to victory in the campaign of reconquest. It is the last of the many battles fought within Manila's history.

On 9 January 1945, the Sixth U.S. Army under Lt. Gen. Walter Krueger waded ashore at Lingayen Gulf and began a rapid drive south in the Battle of Luzon. On 12 January, MacArthur ordered Krueger to advance rapidly to Manila. The 37th Infantry Division, under the command of Major Gen. Robert S. Beightler, headed south.

After landing at San Fabian on 27 January, the 1st Cavalry Division, under the command of Major Gen. Vernon D. Mudge, was ordered by MacArthur on 31 January, to "Get to Manila! Free the internees at Santo Tomas. Take Malacanang Palace and the Legislative Building."

Swing was joined by the Hunters ROTC Filipino guerrillas, under the command of Lt. Col. Emmanuel V. de Ocampo, and by 5 February, they were on the outskirts of Manila.

As the Americans converged on Manila from different directions, they found that most of the Imperial Japanese Army troops defending the city had been withdrawn to Baguio, on the orders of General Tomoyuki Yamashita, commander in chief of Japanese Army forces in the Philippines. Yamashita planned to engage Filipino and U.S. forces in northern Luzon in a coordinated campaign, with the aim of buying time for the build-up of defenses against the pending Allied invasion of the Japanese home islands. He had three main groups under his command: 80,000 men of the Shimbu Group in the mountains east of Manila, 30,000 of the Kembu Group in the hills north of Manila, and 152,000 in the Shobu Group in northeastern Luzon.[1] Colonel Noguchi's soldiers and sailors killed 1,000 men and women, while the other hostages died during the American shelling.

Manila Cathedral after the war

"Griswold and Beightler were not willing to attempt the assault with infantry alone. Not expressly enjoined from employing artillery, they now planned a massive artillery preparation that would last from 17 to 23 February and would include an indirect fire at ranges up to 8,000 yards as well as direct, point-blank fire from ranges as short as 250 yards. They would employ all available corps and division artillery, from 240mm howitzers down. (...) Just how civilian lives could be saved by this type of preparation, as opposed to aerial bombardment, is unknown. The net result would be the same: Intramuros would be practically razed."[2] "That the artillery had almost razed the ancient Walled City could not be helped. To the XIV Corps and the 37th Division at this stage of the battle for Manila, American lives were understandably far more valuable than historic landmarks. The destruction stemmed from the American decision to save lives in a battle against Japanese troops who had decided to sacrifice their lives as dearly as possible."

Before the fighting ended, MacArthur summoned a provisional assembly of prominent Filipinos to Malacañan Palace and in their presence declared the Commonwealth of the Philippines to be permanently reestablished. "My country kept the faith," he told the gathered assembly. "Your capital city, cruelly punished though it be, has regained its rightful place—citadel of democracy in the East." 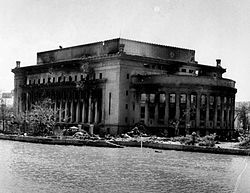 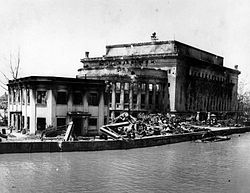 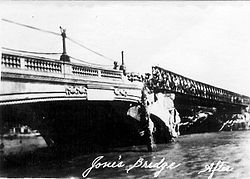 Jones Bridge after the liberation 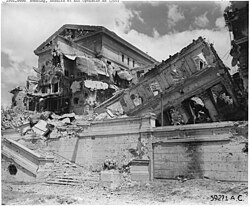 Like many other buildings in Manila, the Legislative Building was not spared from heavy shelling and bombing.

For the rest of the month the Americans and Filipino guerrillas mopped up resistance throughout the city. With Intramuros secured on 4 March, Manila was officially liberated, albeit completely destroyed with large areas levelled by American bombing. The battle left 1,010 U.S. soldiers dead and 5,565 wounded. An estimated 100,000 to 240,000 Filipinos civilians were killed, both deliberately by the Japanese in the Manila massacre and from artillery and aerial bombardment by U.S. and Japanese forces. 16,665 Japanese dead were counted within Intramuros alone.[3][4]

Destruction of the city

The battle for Manila was the first and fiercest urban fighting in the entire Pacific War. Few battles in the closing months of World War II exceeded the destruction and the brutality of the massacres and savagery of the fighting in Manila. In Manila's business district only two buildings were not damaged and those two were looted of their plumbing.[5]

A steel flagpole still stands today at the entrance to the old U.S. Embassy building in Ermita, pockmarked by numerous bullet and shrapnel hits, a testament to the intense, bitter fighting for the walled city. In this category, Manila is second to Stalingrad as being the city with the fiercest urban fighting during the war.[6]

Filipinos lost an irreplaceable cultural and historical treasure in the resulting carnage and devastation of Manila, remembered today as a national tragedy. Countless government buildings, universities and colleges, convents, monasteries and churches, and their accompanying treasures dating to the founding of the city, were ruined. The cultural patrimony (including art, literature, and especially architecture) of the Orient's first truly international melting pot – the confluence of Spanish, American, and Asian cultures – was eviscerated. Manila, once touted as the "Pearl of the Orient" and famed as a living monument to the meeting of Asian and European cultures, was virtually wiped out.

On 18 February 1995, the Memorare-Manila 1945 Foundation dedicated a memorial called the Shrine of Freedom to honor the memory of the over 100,000 civilians killed in the battle. It is also known as the Memorare Manila Monument and is located at Plaza de Santa Isabel in Intramuros. The inscription for the memorial was penned by National Artist for Literature Nick Joaquin and reads:

"This memorial is dedicated to all those innocent victims of war, many of whom went nameless and unknown to a common grave, or even never knew a grave at all, their bodies having been consumed by fire or crushed to dust beneath the rubble of ruins."

"Let this monument be the gravestone for each and every one of the over 100,000 men, women, children, and infants killed in Manila during its battle of liberation, 3 February – 3 March 1945. We have not forgotten them, nor shall we ever forget."

"May they rest in peace as part now of the sacred ground of this city: the Manila of our affections."