The Banaue Rice Terraces (Filipino: Hagdan-hagdang Palayan ng Banawe) are terraces that were carved into the mountains of Banaue, Ifugao, in the Philippines, by the ancestors of the indigenous people. The terraces are occasionally called the "Eighth Wonder of the World".[1][2][3] It is commonly thought that the terraces were built with minimal equipment, largely by hand.[4] The terraces are located approximately 1,500 metres (4,900 feet) above sea level. These are fed by an ancient irrigation system from the rainforests above the terraces. It is said that if the steps were put end to end, it would encircle half of the globe.[5]

Locals up to this day still plant rice and vegetables on the terraces, although more and more younger Ifugaos do not find farming appealing,[6] often opting for the more lucrative hospitality industry generated by the terraces.[7] The result is the gradual erosion of the characteristic "steps", which require constant reconstruction and care. In 2010, a further problem encountered was drought, with the terraces drying up completely in March of that year.[8]

Anthropologist Otley Beyer has estimated that the terraces are over 2,000 years old, but several researchers dispute this and contend that they were built much later.[9][10] There are also giant earthworms ("olang" in Ifugao) of the genus Pheretima or Polypheretima elongata which are blamed for causing damage to the terraces,[11] as well as rodents of the genus Chrotomis mindorensis, and snails.[12] 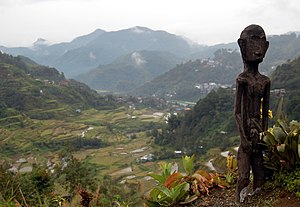 The Bulul, an Ifugao rice god.

The terraces are found in the province of Ifugao and the Ifugao people have been its caretakers. Ifugao culture revolves around rice, and the culture engenders an elaborate array of celebrations linked with agricultural rites from rice cultivation to rice consumption. The harvest season generally calls for thanksgiving feasts, while the concluding harvest with rites called tango or tungul (a day of rest) which entail a strict taboo on any agricultural work. Bayah (rice wine), rice cakes, and betel nut are also consumed as part of the festivities.[13]

The Ifugao people practice traditional farming spending most of their labour at their terraces and forest lands while occasionally tending to root crop cultivation. The Ifugaos have also been known to culture edible shells, fruit trees, and other vegetables which have been exhibited among Ifugaos for generations. The building of the rice terraces entails constructing retaining walls with stones and rammed earth which are designed to draw water from a main irrigation canal above the terrace clusters. Indigenous rice terracing technologies have been identified with the Ifugao’s rice terraces such as their knowledge of water irrigation, stonework, earthwork and terrace maintenance. As their source of life and art, the rice terraces have sustained and shaped the lives of the community members.

In March 2009 the Ifugao rice terraces were declared[14] free from genetically modified organisms (GMO). An event declaring this achievement was organized in Dianara Viewpoint in collaboration with local and municipal government, Greenpeace, and the Miss Earth Foundation.

The Banaue Rice Terraces refer to the cluster close to the Banaue poblacion as seen from the viewpoint. Contrary to popular belief perpetrated by its inclusion on the twenty peso banknote, the Banaue Rice Terraces are not a UNESCO World Heritage Site. They were not included in the UNESCO inscription Rice Terraces of the Philippine Cordilleras due to the presence of numerous modern structures, making it score low in the integrity criterion of UNESCO.[15]

The five clusters inscribed as part of the Rice Terraces of the Philippine Cordilleras are Batad, Bangaan, Hungduan, Mayoyao Central and Nagacadan.[16] Batad and Bangaan are under the jurisdiction of the Municipality of Banaue but are not called the Banaue Rice Terraces.

The Banaue Rice Terraces were declared by the Philippine government as a National Cultural Treasure under Ifugao Rice Terraces by virtue of Presidential Decree No. 260 in 1973.[17]

A tourist taking a photograph of the rice terraces.

Another thriving economy in the Banaue Rice Terraces is tourism.[18] The Tourism industry has developed a number of activities for visitors which may include traditional sightseeing of the terraces and visits to the tribes at the foot of the terraces. A Mumbaki[19] (traditional Ifugao witch doctor) is also recommended[20] to visitors: these doctors can perform spiritual healing rituals.[21] Domestic tourism however has gone down[22] over the past few years. A contributing factor to this is the treatment of domestic tourists by the local guides in the area where it has been reported that local guides are more willing to entertain foreign visitors. The Batad Environmental Tour Guides Association (BETGA) in association with the Batad Baranguay authorities are currently laying a concrete track down from the Batad Saddle to the village proper.

Other notable rice terraces in Ifugao