From Wikipilipinas
Jump to navigation Jump to search
File:Balut1.jpg
A partially peeled balut 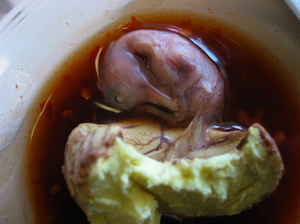 Dissected Balut, showing the head part of the duckling.

Balut is a boiled, fertilized duck egg with an undeveloped embryo, usually eaten with salt. It is considered a delicacy in Asia, especially in the Philippines, where it is popularly believed to be an aphrodisiac and considered a high-protein, hearty snack.

Fertilized duck eggs are kept warm in the sun and stored in baskets to retain warmth. After nine days, the eggs are held to a light to reveal the embryo inside. Approximately eight days later the balut are ready to be cooked, sold, and eaten. Vendors sell cooked balut out of buckets of sand, used to retain warmth, and are accompanied by small packets of salt. Uncooked balut are rarely sold in Southeast Asia. In the United States, many Asian markets occasionally carry uncooked balut eggs, though their demand in North America is not very great. The cooking process is identical to that of hard-boiled chicken eggs, and baluts are enjoyed while still warm.

Duck eggs that are not properly developed after nine to twelve days are sold as penoy, which look, smell and taste similar to a regular hard-boiled egg. In Filipino cuisine, these are occasionally beaten and fried, similar to scrambled eggs, and served with a vinegar dip.

The age of the egg before it can be cooked is a matter of local preference. In the Philippines, the perfect balut is 17 days old, at which point it is said to be balut sa puti ("wrapped in white"). The chick inside is not old enough to show its beak, feathers or claws and the bones are undeveloped. The Vietnamese prefer their balut matured from 19 days up to 21 days, when the chick is old enough to be recognizable as a baby duck and has bones that will be firm but tender when cooked.