The National Shrine of Our Mother of Perpetual Help, also known as the Redemptorist Church and colloquially as Baclaran Church, is a prominent national shrine dedicated to Our Lady of Perpetual Help along Roxas Boulevard in Baclaran, Parañaque, a city in the southern part of Metro Manila, the capital of the Philippines.[1]

The original icon enshrined above the main altar came from Germany, and passed through Ireland and Australia before priests of the Redemptorist Order brought it to what was then the United States territory of the Philippine Islands in 1906. It bears the Papal arms in the back paneling.

Since the Feast of the Immaculate Conception 1958, the shrine has been authorised by the Holy See to remain open 24 hours a day throughout the entire year. The shrine itself was blessed by Pope John Paul II during his first Apostolic Visit to Metro Manila in 1981. The shrine complex serves as the headquarters of the Manila Vice Province of Congregation of the Most Holy Redeemer, while the Cebu Province of the Redemptorists is headquartered in Cebu. The shrine's current rector is the Rev. Fr. Victorino Cueto, C.Ss.R. The shrine celebrates its annual feast day on 27 June, the liturgical feast day of the icon.

The icon enshrined above the high altar, which is covered by a ciborium.

According to the Catholic Bishops Conference of the Philippines, the Shrine and its attached convent were initially dedicated to Saint Thérèse of Lisieux; a grotto statue of the saint on the shrine grounds memorialises her patronage.Template:Citation needed

In 1932, the community transferred to Baclaran.[2] Rev. Fr. Denis Grogan, Template:Post-nominals, the builder, was dedicated to St. Thérèse and made her the patroness of the church and parish house.[2] However, the Ynchaustí family, long-time supporters and friends, donated a high altar on condition that it enshrine the icon of Our Mother of Perpetual Help.[2] When the church opened the shrine became very popular.[2]

The Redemptorist priests replaced the Mother of Perpetual Help icon with a larger version to accommodate the growing number of devotees.

During the Japanese occupation of the Philippines during the Second World War, the invading Japanese troops overran the church, and the congregation was dispersed.[2] Australian and New Zealander priests were interred in the concentration camp at University of the Philippines – Los Baños.[2] The icon was removed from the church and given to a family for safekeeping; their home was later burnt and ransacked towards the end of the Occupation.[2] The icon was initially thought lost until a De La Salle brother found it amongst other valuable artifacts that the Japanese had seized and left at the Old Bilibid prison.[2]

Contrary to popular belief, the Perpetual Help Novena did not originate in Baclaran but at the Redemptorist Church dedicated to Saint Clement Hofbauer in La Paz, Iloilo City celebrated on May 6, 1946.[4][5] After witnessing the devotion of the Ilonggos to the icon, the Australian Redemptorist Rev. Fr. Gerard O'Donnell, Template:Post-nominals introduced the novena to Baclaran. Linguist Rev. Fr. Leo J. English, C.Ss.R. conducted the first Baclaran Novena with 70 participants on Wednesday, June 23, 1948,[4] giving rise to Wednesday's local moniker of "Baclaran Day".

The present Modern Romanesque church is the third to be built on the same site. It was designed by architect César Concio.[4] It took six years to build because most of the money came from small donations—the suggestion from the pulpit was 10 Philippine centavos per week—that often ran out requiring construction to stop.[4] The foundation stone was laid on 11 January 1953 and on 1 December 1958 the new church was consecrated.[4] The church was dedicated on December 5, 1958, and has been open 24 hours ever since.[4]

In the early 1970s, Cardinal-Archbishop of Kraków Karol Wojtyła, said Mass in the Shrine during a brief, unofficial stopover in Manila. In 1981, Wojtyła, as Pope John Paul II, returned to the Shrine as part of his Apostolic Visit to the Philippines.

The Shrine was notably the refuge of several computer engineers from the Commission on Elections during the controversial 1986 Snap Elections. Thirty-five technicians who were operating the COMELEC's electronic quick count staged a walkout from their headquarters at the Philippine International Convention Center to protest the alleged electoral fraud by supporters of dictator President Ferdinand Marcos.[6] Marcos's First Lady, Imelda, was a benefactress of the Shrine, having often brought her children there to perform the Visita Iglesia during Holy Week.

In 2015, a belfry was built as part of the Shrine's redevelopment plan. The structure, which houses a 24-bell carillon cast from the world famous bellfoundry Grassmayr, was blessed on September 8 of the same year by Luis Antonio Cardinal Tagle, the Archbishop of Manila. This is the first time the Shrine has had a bell tower since it was built.[7] The carillon bells are automatically programmed to ring 15 minutes before every Mass or Novena service.

The Shrine's nave, looking east towards the main altar. 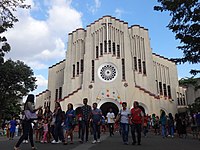 The Church from outside.

The modern, Modern Romanesque building has a full seating capacity of 2,000, but as many as 11,000 people (including those standing) can fit inside during Masses.[4] An estimated 120,000 devotees are currently affiliated with the Shrine.

The belfry, which has mosaics of the icon on its four faces, is built closer to Roxas Boulevard some distance from the Shrine. It also hosts the Sinirangan coffee shop at its base.

The Shrine is under the territory of Santa Rita de Cascia Parish, located a few blocks away from the Redemptorist Church. Both are part of the Vicariate of Santa Rita de Cascia in the Diocese of Parañaque. The Shrine is situated along Roxas Boulevard in Baclaran, Parañaque City, Metro Manila. It is primarily financed by donations and Mass intention donations from Filipinos in the country as well as Overseas Filipinos, and in turn funds charitable social programs for the poor.Template:Citation needed

When the early Redemptorists settled at Baclaran they insisted that the church besides their convent will not become a parish but a mission station in order to free them from sacramental work, except for the Eucharist and Reconciliation. Redemptorists chose this arrangement in order to concentrate on fostering devotion to Our Mother of Perpetual Help, the administering of sacrament of reconciliation and the giving of missions particularly to the poor in Manila and Tagalog region.[2]

The Canon Law of the Catholic Church defines a shrine as “a church or other sacred place which, with the approval of the local Ordinary, is by reason of special devotion frequented by the faithful as pilgrims (Can. 1230). Canon Law explains the implications of being a shrine: “As shrines the means of salvation are to be more abundantly made available to the faithful: by sedulous proclamation of the word of God, by suitable encouragement of liturgical life, especially by the celebration of the Eucharist and penance, and by the fostering of approved forms of popular devotion” (Can 1234 §1). “In shrines or in places adjacent to them, votive offerings of popular art and devotion are to be displayed and carefully safeguarded” (Can 1234 §2).[2]

Services are simulcast on Radyo Veritas 846 every first Wednesday of every month.