Baao, officially the Municipality of Baao (Rinconada Bikol: Banwāan ka Baao; Tagalog: Bayan ng Baao), is a 3rd class municipality in the province of Camarines Sur, Philippines. According to the 2015 census, it has a population of 58,849 people.

Baao is politically subdivided into 30 barangays.

Rinconada Bikol is the main language of the population. Baaoeños used the Baao variant, a lowland dialect (sinaranəw) of Rinconada Bikol which is different of that in Iriga.

Tagalog and English are also spoken in formal gatherings and occasions. The latter is widely used in schools as well as in business transactions.

As one of the historical towns of Catholicism in the Bicol region, Baao has a majority of Roman Catholic adherents. Iglesia ni Cristo on the other hand is the second largest group with a very fast phase of growing membership. Islam has already set off in the town and they are composed of Muslim merchants/immigrants from Mindanao. Various Protestants religions are also present.

Accessible only by land transportation, it is along the main route of the Maharlika Highway and the Philippine National Railways. Commuter rail services are provided by PNR serving from Naga City as its terminus and stops at Baao Station up to Ligao City in Albay then back again northward to Naga. Yet rail service to Manila is currently suspended due severe damages brought by Typhoon Reming in 2006. However, this is overtaken by bus companies that serve daily intercity trips. From Naga City, the easiest way to go to Baao is to ride a bus going to Iriga City from the Naga City Central Bus Terminal and disembark at Baao bus stop.

The town fiesta (Feast of St. Bartolomew) or "Pintakasi" of Baao is celebrated from August 23 to 25. The only festival at Baao is the Barlin Festival; it commemorates the birthday of the First Filipino Bishop, Jorge I. Barlin. It is celebrated annually during the month of April. 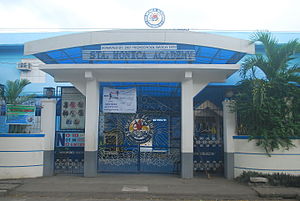 St. Monica Academy is a private catholic school run by Augustinian sisters. It offers both elementary and secondary quality education with the purpose of creating graduates not only of high caliber but also with hearts that are "in one" with the poor.

Ave Maria Early Childhood Impressions Center is a private catholic school for toddlers and pre-schoolers ages 2 yrs. old and above.