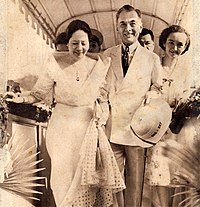 Aurora Aragon Quezon (19 February 1888 - 28 April 1949) was the wife of former Philippine President Manuel Luis Quezon and the second First Lady of the Republic of the Philippines. Known for her involvement with humanitarian activities, she also served as the first chairperson of the Philippine National Red Cross.

Quezon was born on 19 February 1888 to Pedro Aragon and Zeneida Molina in Baler, Tayabas (now Aurora province). The youngest among the brood, she was only nine years old when her father was imprisoned in Fort Santiago because of allegations that he was a member of the Katipunan. Her family sought refuge in the local church during the Siege of Baler. After the Philippine Revolution, her father was freed and was reunited with the family.

In 1911, Quezon began her studies at the Philippine Normal College in Manila. However, she had to stop her schooling because of her poor health.

In 1918, she married Manuel Luis Quezon, then President of the Philippine Senate, in Hong Kong. Their mothers were sisters, making them first cousins. They had four children: Maria Aurora, Maria Zeneida, Luisa Corazon Paz, and Manuel, Jr.

All throughout her husband's political career, Quezon did not meddle in politics. Despite being the first First Lady to reside in Malacañang, she preferred to stay in a nipa house in Malacañang Park or in their property in Arayat, Pampanga.

She chose to get involved in women's organizations such as the National Federation of Women's Clubs of the Philippines (NFWCP), of which she was the honorary chair. Through the organization, she became part of the campaign to give Filipino women the right of suffrage, which was achieved in 1937 under her husband's term as Philippine President.

As World War II broke out, officials of the Philippine Commonwealth government were forced to evacuate to Corregidor in December 1941. Manuel Luis Quezon was inaugurated to a second term as president.

To escape the Japanese forces, the entire Quezon family left the country in February 1942 for a long journey to the US. They arrived in June 1942.

After two years, her husband died of tuberculosis. Then, their family moved to California and volunteered as nurses in the Red Cross while awaiting their return to the Philippines.

Return to the Philippines

Returning to the country in 1945, Quezon still chose not to get involved in politics, declining a slot in the Liberal Party senatorial slate for the May 1945 elections. Instead, she campaigned for Manuel Roxas, who won the presidency.

She also turned down a pension offered to her by the Philippine Congress, arguing that she could not accept it while many who had been widowed or orphaned by the war were still suffering.

Quezon remained active in civic work, becoming the first Chair of the Philippine National Red Cross when it was established as an independent Red Cross organization in 1947. She held the position until her death two years later.

It was her dedication to civic work that indirectly led to her demise. Despite the brewing conflict with the Hukbalahap, the convoy of Quezon left Manila on 28 April 1949 to inaugurate the Quezon Memorial Hospital in Baler. The convoy included her eldest daughter Maria Aurora, son-in-law Felipe Buencamino III, Quezon City Mayor Ponciano Bernardo, and several others.

Shrugging off the danger from the rebellion, the convoy journeyed unhindered until Bongabong, Nueva Ecija, where they were met by machine-gun fire by alleged renegade members of the Huks. Twelve members of the convoy died in the ambush, including Quezon, her daughter, son-in-law, and Bernardo.

The outrage over the ambush heightened the tension between the government and the Huk rebellion, with then President Elpidio Quirino calling for an all-out war against the rebels. Meanwhile, Luis Taruc, leader of the Huks, issued a statement condemning the incident and declaring that if his own investigation revealed that the suspects came from their ranks, punishment would be swiftly meted out.

In 1951, the Aurora Boulevard in Quezon City was named in her honor. In the same year, then President Quirino also created the Aurora sub-province. It became a full-fledged province in 1979. Her remains, which were originally buried in North Cemetery, were transferred beside her husband's remains at the Quezon Memorial Shrine in 2005 through Proclamation No. 836.