Aurora is a province in the Philippines located in the eastern part of Central Luzon region, facing the Philippine Sea. Its capital is Baler and borders, clockwise from the south, the provinces of Quezon, Bulacan, Nueva Ecija, Nueva Vizcaya, Quirino, and Isabela.

Before 1979, Aurora was part of the province of Quezon. Aurora was, in fact, named after Aurora Aragon, the wife of Pres. Manuel L. Quezon, the president of the Philippine Commonwealth, after whom the mother province was named.

In 1572, the Spanish explorer Juan de Salcedo became the first European to visit the region that would be known as Aurora while he was exploring the northern coast of Luzon. Salcedo reportedly visited the towns of Casiguran, Baler and Infanta.

In the early days of the Spanish colonial period, Aurora was ecclesiastically linked to Infanta, which today rests further south, in northern Quezon. The earliest missionaries in the province were the Franciscans, who had established missions in Baler and Casiguran in 1609.[1] Due to lack of available personnel, the region was given to the jurisdiction of the Augustinians and Recollects in 1658, but was returned to the Friars Minor in 1703. Other early missions included Dipaculao, established in 1719, and Casiguran, in 1753.

The early history of Aurora is linked to Quezon province, of which it formed a part, and Nueva Ecija, under which the area was governed as the District of El Príncipe. In 1902, the district was separated from Nueva Ecija and transferred to the province of Tayabas (now Quezon).[1][2]

Aurora became a sub-province of Quezon in 1951 through Republic Act No. 648,[3] and finally became an independent province during the presidency of Ferdinand E. Marcos, through Batas Pambansa Blg. 7 enacted on November 21, 1978.[1][4] 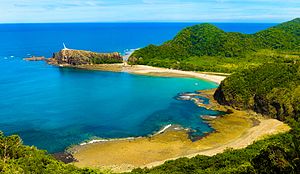 The Dicasalarin Cove at the coast of Baler

Aurora is a coastal province covering an area of 3,147.32 square kilometres (1,215.19 sq mi) in east-central Luzon. To the north, it is bordered by the Northern Sierra Madre Natural Park of Isabela, to the west by the central range of the Sierra Madre which contains the Casecnan Protected Landscape and Aurora Memorial National Park, to the south by the Umiray River, and to the east by the Philippine Sea which opens to the Philippine Sea. The San Ildefonso Peninsula lies in the province's northern portion between the Philippine Sea and the Casiguran Sound.

The province covers a portion of the Sierra Madre mountain range. As such, the elevation is generally steep to very steep and only about 14% of the province's total area is flat.[1]

Aurora's climate is classified as Tropical rainforest climate.[5] It experiences significant rainfall throughout the year.[5] Because the coastal province faces the Pacific Ocean, it is frequently visited by typhoons.[1][6]

Aurora is politically subdivided into 8 municipalities, all encompassed by a lone legislative district. 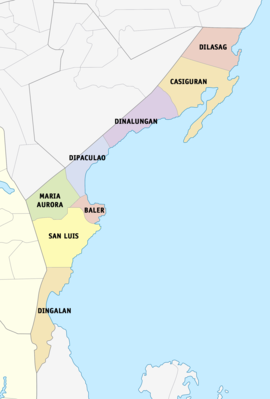 The 8 municipalities of the province comprise a total of 151 barangays, with Suclayin in Baler as the most populous in 2010, and Dibalo in San Luis as the least.

There are also pockets of Negritos, called Dumagats. Most Dumagats are living in the hillsides or mountains. They are believed to have result from a fusion of Austronesian and Melanesian ancestries, and survive from fishing and hunting. There are three kinds of Dumagats in Aurora province, the Umiray Dumagat, Casiguran Dumagat, and the Palanan Dumagat. 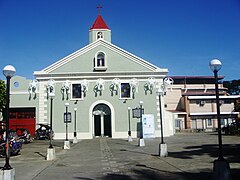 The people of Aurora are heavily Christianized (large majority being Roman Catholic by 87%)Template:Citation needed as a result of hundreds of years of Spanish colonization. Some other Christian believers are also present which includes Methodists, Aglipayan Church, Baptists, Born Again Christians, Jehovah's Witnesses, Members Church of God International, Iglesia ni Cristo and Seventh-day Adventist while Muslims are also found which presence is traced to migration by some people from some parts of Mindanao. Muslims, Anitists, animists, and atheists are also present in the province.

Corn crops, rice and other major agricultural crops are grown in Aurora. It has a total of 38, 928 or 13% of provincial Land Area of Agricultural land. It also has 8,945 hectares (22,100 acres) of rice plantation that averages 24,000 ton every years.

Casiguran is home to the Aurora Pacific Economic Zone and Freeport Authority or APECO a special economic zone located in this coastal town. Created in 2007 by virtue of Republic Act No. 9490 through the efforts of Sen. Edgardo Angara and Rep. Juan Edgardo Angara, it is expected be a major transshipment hub going to the pacific region. It aims to boost social, economic and industrial developments in Aurora and nearby provinces by generating jobs for the people, improving the quality of their living conditions, advocating an eco-friendly approach to industrialization and enhancing the potential of the community in productivity.