Bottled atchara at a Philippine supermarket 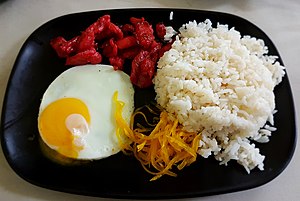 Atchara served as a side dish in the Filipino breakfast tosilog

Atchara (also spelled achara or atsara), is a pickle made from grated unripe papaya popular in the Philippines.[1] This dish is often served as a side dish for fried or grilled foods such as pork barbecue.

Atchara originated from Indian achar, which was transmitted to the Philippines via the acar of the Indonesia, Malaysia, and Brunei.[2][3]

The primary ingredient is grated unripe papaya. Carrot slices, julienned ginger, bell pepper, onion and garlic make up the other vegetables. Raisins or pineapple chunks may be added, and chilis, freshly ground black pepper, red pepper flakes, or whole peppercorns complete the mixture. These are then mixed in a solution of vinegar, sugar/syrup, and salt preserves.

The mixture is placed in airtight jars where it will keep without refrigeration, however once opened it is preferably kept chilled to maintain its flavour.[4] 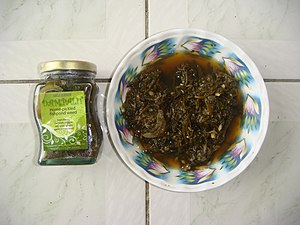