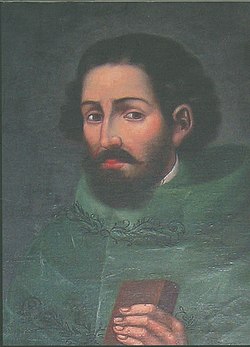 Doctor Antonio de Morga Sánchez Garay (1559, Seville, Spain—July 21, 1636) was a lawyer and a high-ranking colonial official in the Philippines, New Spain and Peru. He was also a historian. He published the book Sucesos de las islas Filipinas in 1609, one of the most important works on the early history of the Spanish colonization of the Philippines. He also led the Spanish in one naval battle against Dutch corsairs in the Philippines, in 1600.

Education and service in the Philippines

He graduated from the University of Salamanca in 1574 and in 1578 received a doctorate in canon law. He taught briefly in Osuna, and then returned to Salamanca to study civil law. In 1580 he joined the government service. Among other positions in Spain, he held that of auditor general of the galleys.

In 1593 he was sent to Manila as lieutenant governor of the Philippines, the second most powerful position in the colony, after the governor-general. He arrived in Manila on June 11, 1595, from Acapulco, in New Spain. In 1598 he resigned as lieutenant governor to assume the office of oidor, or judge, in the newly re-established Audiencia of Manila.

In 1600 Dutch corsairs under Olivier van Noort were preying on shipping entering Manila harbor. According to Morga's account, Governor Francisco de Tello de Guzmán and the Audiencia appointed Morga to go to Cavite and assemble, equip and supply a fleet to attack the Dutch (October 31, 1600). The ships available were the San Diego, the San Bartolome and some smaller vessels. Some refitting was necessary, since both the San Diego and the San Bartolome were cargo ships. According to Morga, this was done without drawing on the colonial treasury (i.e., at his own expense, perhaps with other private contributions).

Morga had had some military experience, being general of a Spanish fleet sometime previously and lieutenant of the captain general of the Philippines for some years, but he had never seen combat.

On December 1, 1600, Governor Tello appointed Morga captain general of the fleet, with orders to attack the Dutch. The two forces met on December 14, 1600. Unable to fire (because the gunports were closed), Morga ordered the San Diego to ram the Mauritius and grapple it. Thirty soldiers and some sailors then boarded it, taking possession of the forecastle and after-cabin and capturing the Dutch standard. The main and mizzen masts were stripped of sails and rigging. The Dutch retreated to the bows, where at first it seemed they were about to surrender. However, they soon renewed the fight with muskets and artillery.

An intense, six-hour hand-to-hand battle ensued, and many were killed on each side. The Dutch were said to have very few men left, and then the Mauritius caught fire. Fearing the fire, the San Diego recalled its men and cast off. However, the Spanish ship was then seen to be taking on water and sinking, either from the ramming or from the artillery of the Mauritius. (Accounts differ.)

The Dutch took this opportunity to extinguish the fire and set sail with the foresail, the only one remaining, and with a skeleton crew. They eventually reached Borneo. The other Dutch ship, however, was captured by the San Bartolome. It was taken to Manila, where the captain and the surviving sailors were garroted on the orders of the governor.

The San Diego sank so quickly that the men for the most part were unable to disarm or abandon ship. Perhaps 350 men were lost. Morga himself swam for four hours, carrying the Dutch standard with him, until he reached a small deserted island, where a few others of the ship's company also arrived.

This is based on the account of Morga himself. He blamed the captain of the San Bartolome for the loss of the San Diego, because he had pursued the other Dutch ship rather than attacking the Mauritius. The Dutch account of these events was very different, accusing Morga of incompetence and cowardice.

French explorers led by Franck Goddio excavated the sunken San Diego with its treasure trove in 1992. Because of the astounding number of artifacts found with it (over 34,000), this was hailed as a great archaeological discovery. The artifacts included Chinese porcelain, celadon ware, Japanese katanas, Spanish casques, Portuguese cannons and Mexican coins. There is now an MV San Diego warship museum on Fortune Island, the island where Morga and the other survivors of the San Diego first reached land.[1]

In New Spain and Peru

On July 10, 1603 he left Manila, in command of the ships sailing that year for New Spain. He became alcalde of criminal causes in the Royal Audiencia of Mexico City. He was also advisor to the viceroy on military matters and counsel for the Holy Office of the Inquisition. He served in Mexico until 1615, publishing there his famous history of the Philippines in 1609. (See below.)

In 1615 he was named president of the Audiencia of Quito, within the Viceroyalty of Peru. He arrived in Guayaquil on September 8, 1615, having narrowly escaped falling into the hands of Dutch corsairs off the island of Santa Clara. He took up his office in Quito on September 30, 1615. During his administration, the textile industry advanced and the University of San Gregorio Magno was founded. This occurred, however, in a climate of confrontation between the civil and ecclesiastic powers and disputes between the Creole and Peninsular monks for control of the religious orders.[2]

In 1625 Morga was investigated for corruption. He was arrested, but on September 18, 1627 he was cleared and his offices were restored to him. He died in 1636. Except for the period 1625-27, he held the position of president of the Audiencia of Quito from 1615 until the year of his death.

History of the Philippine Islands

Morga suffered important failures in both his military and political capacities. The same cannot be said for his work as historian. In 1609, he published the work for which he is now remembered — Sucesos de las Islas Filipinas (Events in the Philippine Isles). This work, perhaps the best account of Spanish colonialism in the Philippines written during that period, is based partly on documentary research, partly on keen observation, and partly on Morga's personal involvement and knowledge.

The history was published in two volumes, both in 1609 by Casa de Geronymo Balli, in Mexico City. (The work had circulated for years before this in manuscript form.) New Spain Viceroy Luis de Velasco (hijo) authorized the publication and granted Morga the sole right to publish it for ten years, on April 7, 1609. On the same date, Fray García Guerra, archbishop of Mexico, approved the publication of the work. The history covers the years from 1493 to 1603. Political, social, and economic phases of life, both among the natives and their conquerors, are treated. Morga's official position allowed him access to many government documents.

The work so impressed Philippine independence hero José Rizal (1861-96), himself a man of letters and of action, that he decided to annotate it and publish a new edition. He began work on this in London, completing it in Paris in 1890. He wrote:

If the book (Sucesos de las Islas Filipinas) succeeds to awaken your consciousness of our past, already effaced from your memory, and to rectify what has been falsified and slandered, then I have not worked in vain, and with this as a basis, however small it may be, we shall be able to study the future.[3]