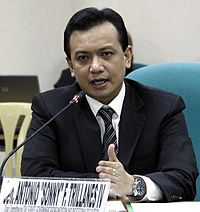 Antonio Fuentes Trillanes IV (born 6 August 1971) is a politician and retired Navy officer.[1] He served as a senator from 2007 to 2013 and from 2013 to 2019. As a soldier, he was involved in the Oakwood mutiny in 2003 and the Manila Peninsula siege in 2007, both in protest against the administration of President Gloria Macapagal-Arroyo. He has been a staunch critic of President Rodrigo Duterte, particularly criticizing the latter's drug war and alleged human rights violations.

Trillanes was one of the top performing senators in terms of principally authoring and sponsoring the most number of national bills into law. He unsuccessfully ran for vice president in the 2016 elections, placing next to last. In October 2021, Trillanes announced that he is running for senator in 2022 elections.

Antonio Fuentes Trillanes IV was born on 6 August 1971 in Caloocan. His parents were Antonio Floranza Trillanes Sr., a Navy captain from Ligao City, Albay, and Estelita Dia Fuentes of Capiz. Trillanes is one of five children. [2]

Trillanes has a master’s degree in public administration from the University of the Philippines Diliman.[4]

On 27 July 2003, Trillanes, then a lieutenant sergeant, and Army Capt. Gerardo Gambala led a group of 321 junior officers and enlisted soldiers of the Armed Forces of the Philippines in a mutiny against the administration of President Gloria Macapagal-Arroyo.[5] The group, which called themselves “bagong katipuneros” or “Magdalo,” from the name of the Katipunan faction, occupied Oakwood Premier Ayala Center (now Ascott Makati) to protest the alleged corruption in Arroyo’s administration. They also claimed that the president was set to declare martial law.

The mutiny lasted 18 hours, with the soldiers subsequently charged in a general court-martial. Trillanes was detained for seven years and 6 months.

On November 29, 2007, Trillanes, along with Brigadier Gen. Danilo Lim and 25 other officers charged in the Oakwood mutiny more than four years earlier, walked out of their trial in Makati.[6] They took control of the Manila Peninsula Hotel, which is situated a few blocks from Oakwood Premier Ayala Center, the site of their first mutiny. During what came to be known as the Manila Peninsula siege, Trillanes and his cohorts called for the resignation of President Arroyo, who at this point had been accused of committing electoral fraud in the 2004 presidential election.[7] Vice President Teofisto Guingona Jr. joined Trillanes’s group in Manila Peninsula.

The siege lasted six hours, with Trillanes and Lim surrendering to authorities “to avoid loss of lives.”

While in detention, Trillanes successfully ran for senator in the 2007 elections. He initially intended to run as an independent candidate but later joined the senatorial lineup of the opposition at their invitation.

On July 23, 2007, he filed a motion at the Makati Regional Trial Court (RTC) to allow him to perform his duties as a senator despite being in detention and also attend the State of the Nation Address.[8] His was disallowed by the court, which led Vice President Teofisto Guingona Jr. and University of the Philippines President Francisco Nemenzo Jr. to launch the Let Trillanes Serve movement.

On 17 October 2007, the Supreme Court directed Makati RTC Judge Oscar Pimentel and the Armed Forces of the Philippines to respond to Trillanes’s petition within 10 days. These did not come to fruition, however, after Trillanes led the siege of Manila Peninsula on November 29, 2007.

Trillanes successfully sought reelection in the 2013 senatorial election with the Nacionalista Party. He authored 232 bills in 2018, making him one of the most productive senators in the 17th Congress (from July 2016 to June 2019).[10]

Candidacy in the 2022 vice presidential election

Trillanes was a candidate in the vice-presidential election in 2016. He was without a running mate but endorsed the presidential bid of Grace Poe.[11]

While campaigning for vice president, Trillanes also campaigned against the presidential bid of Rodrigo Duterte.[12] He financed political ads criticizing Duterte, including a video where the then Davao City mayor is shown cursing and making vulgar gestures. Duterte’s running mate, Alan Peter Cayetano, filed a petition to the Taguig Regional Trial Court to stop the airing of the advertisements. A temporary restraining order was issued by the court against the airing of the ads. [13]

Candidacy in the 2022 senatorial election

On 7 October 2021, Trillanes announced that he is running for senator in the 2022 elections. He made the announcement hours after Vice President Leni Robredo declared her candidacy for the presidency; the former senator had been anticipating her announcement of her decision regarding the election because of the understanding that his decision were contingent on her plans being that they are both prominent figures in the opposition.[14] “I am so honored to run as Senator under the slate of our next President,” Trillanes wrote on Twitter. Other senatorial candiadates on the ticket are opposition incumbent senators Leila de Lima and Risa Hontiveros, as well as human rights lawyer Chel Diokno and former Ifugao representative Teddy Baguilat.[15]

Trillanes filed his certificate of candidacy on 8 October 2021.[16]

During the campaign season for the 2016 presidential election, Trillanes accused presidential candidate Rodrigo Duterte of having bank accounts with the Bank of the Philippine Islands in its Julia Vargas branch that contain Php 2.2 billion.[17] Duterte admitted to the existence of the accounts but did not give in to calls to sign a waiver that would allow scrutiny of the accounts.[18]

Duterte responded to Trillanes’s accusations by attempting to revoke the amnesty granted him by President Benigno Simeon Aquino III in connection to his involvement in the 2003 Oakwood mutiny and the 2007 Manila Peninsula siege. On 31 August 2018, Duterte signed Proclamation No. 572 formalizing the revocation.[19] On 7 September 2018, the Department of Justice filed the application for the arrest of and hold departure against Trillanes, with acting prosecutor-general Richard Fadullon of Makati Regional Trial Court (RTC) Branch 150 signing it as “very urgent.”

Opposition leaders criticized the move by Duterte, with Magdalo Representative Gary Alejano, who was among the leaders of the Oakwood mutiny, calling it a “political persecution.”[20] Akbayan Representative Tom Villarin said the attempt to revoke the amnesty was “clearly a political vendetta.” Former solicitor general Florin Hilbay likened the impending arrest to the case of opposition senator and staunch Duterte critic Leila de Lima, who has been detained on drug trafficking charges since 2017.[21] Trillanes’s supporters held a vigil outside the Senate.

On October 22, 2018, the Makati RTC denied the petition to arrest Trillanes. It reasoned that the dismissal of the coup d’etat case against him was final and executory.[22]

On 19 July 2019, the Philippine National Police-Criminal Investigation and Detection Group filed charges of “sedition, cyber libel, estafa, harboring a criminal, and obstruction of justice” against Trillanes and other leaders of the opposition.[23] On 10 February 2020, Trillanes was among individuals who were induced for “conspiracy to commit sedition” in connection to an alleged plot to oust Duterte.[24]

Trillanes is married to Arlene G. Orejana, who, like him, is a graduate of the Philippine Military Academy. Their marriage has produced three children, one of whom died 21 days after birth.[25]