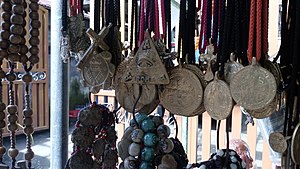 Anting-anting, in Filipino culture, is an amulet, talisman, or charm believed to possess mystical supernatural properties. It is most commonly used as a means of protection against sickness, danger, and even death. Other names for anting-anting include ginam-mol or galing-galing in Ilocano, mutya in Tagalog, likit in Waray, odom in Bicol; and adimat among Filipino Muslims.

Origin of the Word

An anting-anting also loses its power when it leaves its owner's possession without their knowledge or blessing. Anting-antings sold at holy places are considered patay (dead/without power). These kinds are said to have to undergo sacred and secret rituals to become powerful and effective.

Anting-antings come in different forms. One can be a crocodile’s tooth, a snake’s fang, a whale’s spine, a shark’s fin, odd stones, a rooster’s spur, a guinea bird’s horn, a plant's roots, herbs, or anything rare and/or strange, like a twin-tailed lizard or two-headed snake.

Each anting-anting serves a different purpose. Some of them promise romance or love charms and others purportedly make the holder impervious to bullets or let them disappear and reappear at will, while still others ward off evil spirits. There are also anting-antings that offer special gifts, such as the esoteric art of hilot (massage and healing), hula (fortune telling), and kulam (spells and witchcraft).

One of the most intriguing aspects of the anting-anting is its association with religious belief. Religious medals are being used as anting-antings, which is a form of syncretism, or a mix of beliefs from different schools of thought.