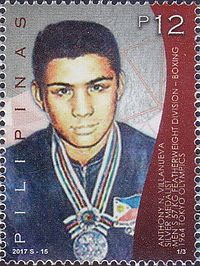 Anthony N. Villanueva (March 18, 1945 – May 13, 2014) was a Filipino boxer. He competed in the featherweight (−57 kg) division at the 1964 Olympics and won a silver medal. Shortly after the Olympics he turned professional, but retired after five bouts. Besides boxing, Villanueva worked as an actor and boxing coach in the Philippines and as a security guard in the United States. He died from multiple complications after suffering from five strokes.[1]

His father, José Villanueva, was also an Olympic boxer who won a bronze medal as a bantamweight at the 1932 Los Angeles Games.[1]

Anthony Villanueva was scouted by businessman and sport enthusiast Eugenio Puyat. After winning the 1962 national title, he qualified for the 1964 Summer Olympics in Tokyo. He faced Soviet boxer Stanislav Stepashkin, in the gold medal match and lost in a 3–2 controversial decision.[3][4]

Villanueva became a professional boxer at the age of 20.[1] His first fight as a professional was with Shigeo Nirasawa of Japan at the Araneta Coliseum in Cubao, Quezon City. The event took place on October 2, 1965, as part of Fiesta Fistiana, a fundraising event organized by the Philippine Sportswriters Association for disabled boxers.[5]

Villanueva won the match by a controversial majority decision. The scoring of the judges was criticized and was described as something seen in movies. Judges Alfredo Quiazon and Alex Villacampa chose Villanueva as the victor with the tight scores 29–28 and 28–27 respectively. The third judge Jaime Valencia called it a draw with the score 29-all.[6]

Anthony and his father filed a case against Ilang-Ilang Productions of Espiridion Laxa for Php 45,000 for "exploitation of popularity". The production firm was accused of filming the said match without the consent of the Villanuevas. The results of the case were never announced.[6]

Shortly after winning the silver medal, Villanueva went into an acting career, though at the cost of his amateur boxing license. He then starred in five movies.[7] He appeared in Malakas, Kaliwa't Kanan with Nida Blanca, and Salonga Brothers with then actor Joseph Estrada. Villanueva also appeared in The Pancho Villa Story.[6]

Villanueva was separated from his first wife from whom he had two children. He remarried in the US, and had a son with his American wife. After coming back from the US, he stayed with his common-law wife, Liezel Beldia, for 17 yrs until his death in 2014; they had a son together.[8]

In 1976, he went to the United States to earn a living. He worked as a cook in a Mexican restaurant in Massachusetts, then as a security guard in Staten Island and the Philippine Consulate in New York City.[1] He also worked as a boxing coach at private gyms. He later returned to the Philippines in 1988 assisted the Philippine national boxing coach team to prepare the team for the 1988 Summer Olympics. He returned the United States after failing to find a stable job but eventually returned home for good.[5][9]

Villanueva suffered a mild stroke in 1999. He tried selling his silver medal for Php 1 million a year later. He was persuaded to donate the medal to the Philippine Sports Commission instead.[9]

Villanueva died in his sleep on May 13, 2014, in Cabuyao, Laguna. He was 69.[10] Villanueva was bedridden due to multiple complications including kidney malfunction and severe heart ailments. He had suffered about five strokes and heart attacks in the past fourteen years before his death.[9] Villanueva won the country's first silver medal at the 1964 Summer Olympics, a feat echoed by Onyok Velasco when the latter won the country's second silver medal at the 1996 Summer Olympics.

Manny Pacquiao described Villanueva as the "original Filipino boxing icon who should never be forgotten by the nation."[11] AIBA president Wu Ching-Kuo also said that the death of Villanueva not only left a void in Philippine boxing but also "in the hearts of all those who knew this hero around the world."[12]