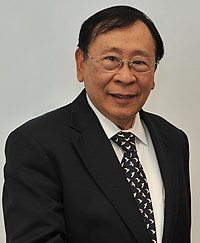 Alberto Romulo is a Filipino politician, statesman, and diplomat. He served as the Secretary of the Department of Foreign Affairs, under the Aquino administration, from 23 August 2004 to 25 February 2011.

Alberto Romulo began his political career in 1986 when former President Corazon Aquino appointed him as a member of the Philippine Economic Team and as Secretary of Budget and Management. It was during at this time when he also became the Chairman of Development Budget Coordinating Committee and a member of the Monetary Board.

From 1992 to 1996, he was the Senate Majority Leader. This earned him the Chairman position of Senate Committee on Rules, Senate Committee on Banks, Financial Institutions and Currencies and Senate Committee on Social Justice, Welfare and Development. It was during this tenure when he created and established Bangko Sentral ng Pilipinas (Central Bank of the Philippines).

In June 8, 2001, he was appointed as the Executive Secretary and became the Chairman of the Cabinet Oversight Committee on Internal Security, NEDA (National Economic Development Authority) Board Executive Committee and 14 other offices and agencies. His incumbency ended on August 22, 2004.

He was appointed secretary of the Department of Foreign Affairs in August 2004 and served until February 2011. He also served as Chairman of the Association of Southeast Asian Nations (ASEAN) in 2007.

He was appointed chairman and director of the board of the Development Bank of the Philippines (DBP) in March 2017.

As a Senate Leader for five years, he passed a total of 55 legislation. These are: