Holy Week (Filipino: Semana Santa) in Christianity is a week-long commemoration of Christ's passion and resurrection starting from Palm Sunday to Black Saturday, leading to the much celebrated Easter Sunday. Filipinos are known for their solemn observance of Holy Week. It is their way of renewing their relationship with God and is commonly regarded as the season of repentance and mending of immoral living.

The Philippine Star listed Ten of the Common Holy Week Practices in the Country:

1. Palm Sunday/Palaspas
Palm Sunday is the beginning of Holy Week. It commemorates the entry of Jesus Christ into Jerusalem. Filipino Catholics bring their palaspas or decorated palm fronds to church to be blessed by the priest.

2. Fasting
During the Lent season, people give up certain types of luxuries as a form of penitence. Others choose to refrain from meat or not eating what they are accustomed to eating daily. However, to ensure fasting is safe especially to the people with health conditions, doctor's advise is recommended. 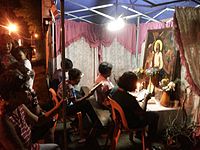 3. Pabasa ng Pasyon
The pasyon is a verse narrative about the life and suffering of Jesus Christ. The verses are structured in five-line stanzas, with each line containing eight syllables. The pasyon is commonly sung during Holy Week, starting Holy Monday. The reading of the pasyon is a traditional religious practice in the Philippines and people gather around the reader of the pasyon to listen and reflect. It is seen by many of its practitioners as a vow or panata.

4. Visita Iglesia
Visita Iglesia (Spanish for "Visit of the Churches") is a Holy Thursday tradition of Philippine Roman Catholics, brought to us by the Spaniards. It is the practice of visiting 7 churches to pray and meditate. The tradition has its roots to the early years of the establishment of the Church, when there were 7 great basilicas in Rome that Christians would visit for adoration of the Blessed Sacrament after the Mass of the Lord's Supper on Holy Thursday. The practice continues not only in the Philippines but in other Roman Catholic countries, especially in cities with numerous churches. Adoration may continue up to midnight.

5. Seven Last Words
The Seven Last Words (Spanish: Siete Palabras) is a Filipino Catholic tradition in which devotees commemorate the words spoken by Jesus before he died on the cross. It is observed every Good Friday, starting from noon to three in the afternoon.

6. Senakulo
The Senakulo (from the Spanish cenaculo) is a Lenten play that depicts events from the Old and New Testaments related to the life, sufferings, and death of Christ.
The senakulo is traditionally performed on a proscenium-type stage with painted cloth or paper backdrops that are called telon. It takes at least eight nights - from Palm Sunday to Easter Sunday - to present the play. Christ is presented traditionally as meek and masochistic, submitting lamblike to his fate in obedience to authority.

7. Moriones Festival
The Moriones Festival is a Philippine religious festival which takes place in Marinduque during Holy Week in the Philippines. Its highlight is a street play performed on Easter Sunday by penitents wearing large, colorful hand-painted masks carved out of wood. Each mask has a Roman centurion’s helmet, from which the name of the festival is taken, morion being Spanish for helmet.


Every year on Good Friday or the Friday before Easter a dozen or so penitents - mostly men but with the occasional woman - are taken to a rice field in the barrio of San Pedro Cutud, 3km (2 miles) from San Fernando, Pampanga and nailed to a cross using two-inch (5 cm) stainless steel nails that have been soaked in alcohol to disinfect them. The penitents are taken down when they feel cleansed of their sin. Other penitents flagellate themselves using bamboo sticks tied to a rope. The blood is real, but the motivation is questionable.

9. Public flagellations
Public flagellations are the reenactment of the torture and death of Christ. It is done by Catholics who have made a vow or panata. It is also their way of expressing gratitude for the prayers granted. Tondo district is known for its Holy Week ceremonial acts. Flagellants wearing only trousers, with their faces covered and heads crowned with thorns, beat their bodies with whips or twigs with nails in them.
Flagellants in Pampanga during Holy Week are called "Magdarame." They either carry wooden crosses or whip their backs with bamboo lashes called “burilyos." 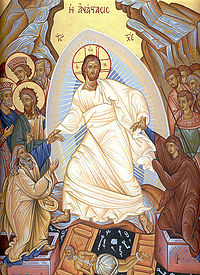 10. Salubong
On the dawn of Easter Sunday at exactly 4:00 a.m. there is a salubong ceremony where the image of the Virgin Mary meet the image of the resurrected Christ in the middle of the church's compound.